Editor’s note: The fol­low­­­ing is the Avalon Sheriff’s Sta­tion significant incidents report for the week of Sept. 2, 2021 to Sept. 8, 2021. All suspects are presumed innocent until proven guilty in a court of law. Many people who are arrested do not get prosecuted in the first place and many who are prosecuted do not get convicted.

• Deputies responded to the 200 block of Metropole Avenue regarding possible counterfeit currency. The deputies spoke to the business owner who told them a male adult attempted to purchase items using a $100 “prop bill” from a movie set. The store owner returned the alleged counterfeit currency to the male who left the store.

Deputies checked the surrounding area and were unable to locate the male.

Safety note: “Prop Bills” are very similar in appearance as compared to genuine currency. One of the main characteristics is the wording “FOR MOTION PICTURE USE ONLY” in the upper right portion that states “THE UNITED STATES OF AMERICA” on a genuine bill.

The prop bills are printed in any denomination but hundreds are most common.

We caution merchants and others to inspect all currency for authenticity to avoid financial loss.

• Deputies responded to the 200 block of Sumner Avenue regarding a drunk male at the location. They contacted a male who displayed signs of being under the influence of alcohol. During their investigation the deputies determined the suspect was drunk in public and unable to care for himself. Raul Reyes, 38, of Avalon, was arrested on suspicion of being drunk in public, transported and booked at Avalon Sheriff’s Station.

• Baywatch Isthmus paramedics and deputies received a call of a capsized vessel at Eagle Rock. The vessel was located along with two passengers. One female passenger was sitting onshore and a male passenger was found deceased floating in the ocean. Both passengers were transported to Catalina Island Medical Center and deputies conducted an investigation.

There was no evidence of a crime or foul play. Deputies removed multiple boat parts and pieces of the vessel which was destroyed by the surf.

• Deputies assisted Code Enforcement at the Radio Station regarding the removal of debris and possible trespassing. They were able to clear the location without incident.

• Deputies responded to the 200 block of Descanso Avenue regarding a loud music disturbance. The deputies contacted a female adult and warned her regarding the city’s music ordinance. She was compliant and agreed to turn down the music.

• Deputies and the Fire Departments responded to a medical emergency call at Crescent Avenue and Sumner Avenue. The caller stated a male was standing at the location and bleeding from his leg. They determined the male was stung by a Sting Ray and treated at the scene.

• Deputies responded to a disturbance call at Descanso Beach. The caller stated two male adults were refusing to leave the property.

The deputies contacted the males who were experiencing a customer service issue that was resolved by the manager at the location.

• While on patrol, deputies saw a male arguing with the bouncer at the Chi Club.

When the male was contacted by the deputies, they noticed he had the strong odor of alcohol emitting from his breath and person and he was holding a beer in his hand.

The deputies detained him and conducted an investigation. The deputies arrested Brian Siwecki, 30, of Laguna Niguel, on suspicion of drunk in public. He was transported and booked at Avalon Station.

• Deputies responded to the 300 block of Crescent Avenue regarding a possible spousal assault call.

The caller stated a male was pushing a female at the location. The deputies contacted both parties and determined no crime had been committed. The male was only assisting his female companion who was extremely intoxicated.

• Deputies responded to a juvenile disturbance call on the 200 block of Clarissa Avenue. The caller stated juveniles were banging on his front door and then running off. The juveniles were contacted by deputies and told not to play ding, dong, ditch anymore.

• Deputies on foot patrol observed a female crying. While speaking to her they determined she was the suspect in an assault. The deputies conducted an investigation and determined the suspect had assaulted her fiancé injuring his eye. Melissa Barajas, 33, of Hanford, was arrested on suspicion of spousal assault and booked at Avalon Sheriff’s Station.

• Deputies responded to the 100 block of Metropole Avenue regarding a vandalism call. The informant stated the company’s golf cart was taken and returned a few hours later vandalized. The golf cart’s exterior had spray paint on the side panels, windshield and rims. Surveillance camera footage is being reviewed for possible suspects and the case is currently under investigation.

• Deputies received a disturbance call on the 200 block of Crescent Avenue. The caller stated a 70 year old male wearing a pink shirt was irate and yelling. Deputies checked the location and were unable to locate the disturbing party.

• Deputies received a call of a male driving a rental golf cart while drinking beer. The deputies checked the surrounding area and contacted the driver of the cart. They determined he was drinking a soda pop that resembled a beer bottle and he did not appear under the influence of alcohol. 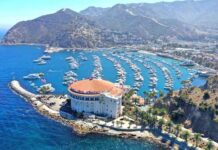