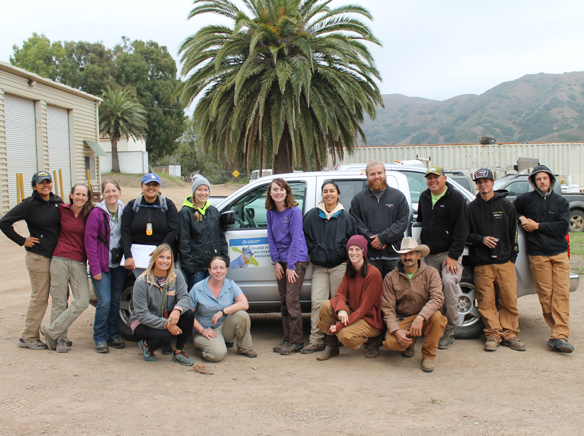 Spotlights sweep the wild Island landscapes as a truck slowly climbs over roads and rock. Suddenly, two bright white spots shine out of the darkness.

“Deer!” a spotter softly calls, tapping lightly on the top of the truck. Lights zero in on the non-native mule deer, bringing the animal more clearly into focus. As fog closes in, the group of Catalina Island Conservancy wildlife biologists and volunteers measure data points including GPS coordinates, wind speed, age, sex and landscape features. Four groups of four continued this intricate process for up to nine dark hours overnight – and then prepared to do it all over again the next evening.

Early this week, the Conservancy conducted the annual Deer Survey across Catalina Island to help scientifically estimate the growing number of mule deer on the Island. Since the mule deer is crepuscular, with most activity during the twilight hours, these ‘spotting’ activities occur between the hours of dusk and dawn. The first night, the Conservancy spotted deer on defined stretches of more than 70 miles of road. The second night repeated the activities of the first exactly, down to the route, mileage and speed driven in order to account for variable weather conditions.  All data points collected from the surveys were used to help produce the final aggregate estimate of the total deer population on Catalina. In conjunction with faculty at CSU Fullerton, the Conservancy inputs data from the survey into the program Distance 6.2. The software runs multiple algorithms using the distance-sampling technique to estimate deer density across the Island. By using the same methodology year after year, the Conservancy acquires and utilizes trend data to monitor the mule deer population.

Mule deer were introduced on Catalina to promote hunting in the 1920s and 1930s.  It was quickly discovered this move created an ecological imbalance by threatening native species that were safe prior to the introduction of these mule deer. When it comes to plants, mule deer love the tasty endemics that historically never developed protective mechanisms against large herbivores on Catalina Island. These are the same foods that animal species like the Catalina Island fox prefer, with deer browsing threatening an important segment of available food resources for the foxes.

Last year’s surveys showed that the density of deer on Catalina Island is nearly ten times the average in California. The California Department of Fish and Wildlife (CDFW), not the Conservancy, manages the deer on Catalina Island as property of the State of California, and have stated that the Island has several times the suggested amount of mule deer that can be supported. As a result, deer are subject to a ‘boom-and-bust’ cycle with a population that expands, crashes and repeats. This is hard on the deer, as well as all of the animals and plants affected by their population.

Surveys such as the annual Conservancy exercise conducted earlier this week help to track the population cycle, proactively identifying trends or issues that may arise. Timing of the survey is critical. This time of year, fawns are large enough to be observed and the antlers on many bucks have developed with defined tines (antler points). Also, State hunting season starts this month.

The Conservancy welcomes hunters as a means to help manage the Island’s introduced mule deer population. With one of the longest hunting seasons in the state, the Conservancy’s mule deer hunting season runs July 15 to December 26. All hunters must be Conservancy Explorer level members.  Resident Members receive special benefits, including receiving their first tag (antlerless) free with a second tag available for purchase at only $100. Island residents can take advantage of a Conservancy membership at the Explorer level or above with a 25% resident discount (drivers license required).

For more information on mule deer or game management, please visit the Catalina Island Conservancy online. Thank you for your assistance in protecting life, property and habitat.