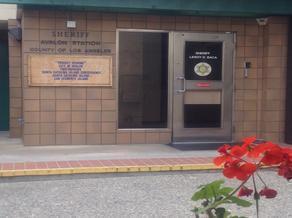 The following is the Avalon Sheriff’s Station significant incidents report for the period of Aug. 4 to Aug. 10, 2022.

All suspects are presumed innocent until proven guilty in a court of law. Many people who are arrested do not get prosecuted in the first place and many who are prosecuted do not get convicted.

Deputies responded to a disturbance call at Two Harbors Beach. The caller stated a man was on the beach and possibly drunk. The deputies contacted the man and determined he was not drunk or in a good mood. The man had not committed any crime was left to enjoy the sunset.

Deputies responded to Whites Landing regarding a possible domestic violence call. The deputies contacted a man who stated he was assaulted by his girlfriend approximately 5 months ago. The man said his girlfriend became upset because he forgot to buy her a toothbrush, so she gave him a left hook. The girlfriend was not at the location at the time of the incident. The case is being investigated by Avalon Detectives

Deputies responded to a disturbance call at the Chi Chi Club. The caller stated a male was arguing with the bouncer over a fake ID. The bouncer denied the man entry because he believed the ID was fake and the young man was not old enough to enter the club. Deputies responded and the underage tourist split before they arrived.

Deputies responded to the 300 block of Sumner Avenue regarding a possible burglary just occurred. Deputies contacted the informant who stated a man was seen leaving the rear house. The informant told deputies the man did not steal anything and was possibly drunk. The deputies were able to locate the man and determined he enjoyed Thursday night a little too much. The man said he entered the wrong home and went to sleep. He apologized and went home.

Deputies responded to a possible kidnapping at Descanso Beach. The caller stated someone had taken a 15 year old and there was a fight between 2 men. Deputies immediately responded to the location and witnesses pointed out the possible suspect. The man was detained and deputies conducted an investigation. After interviewing numerous people, deputies determined there was no kidnapping. The man was extremely intoxicated and was arrested for being drunk in public. He was booked at Avalon Sheriff’s Station.

Deputies responded to a suspicious person call on the 100 block of Crescent Avenue. The caller stated a male white with no shirt or shoes was possibly selling drugs. Deputies responded and checked the location for the shoeless, alleged dope dealer. He was in the wind before they arrived.

Deputies on patrol observed a man riding his skateboard and performing tricks in the Vons parking lot. The deputies contacted the man and told him he could practice his X Games stunts at Avalon’s Skate Park. The future Tony Hawk understood and said he would stay out of the lot.

Deputies responded to a golf cart collision on Stage Road. The deputies arrived an observed a rental golf cart had overturned with 6 people on board. The passengers suffered minor injuries with 1 sustaining a fractured arm. The injured were treated by paramedics and a collision report was written.

A sergeant on patrol observed a fight on the 300 block of Sumner Avenue. He exited his patrol jeep and detained the boxers and conducted an investigation. It was determined the men fighting were family members and had a little too much to drink. Neither of the combatants wanted to press charges and told deputies it was family business.

Deputies responded to Cabrillo Mole regarding a man who jumped into the water from the Newport Flyer while it was docking. The deputies contacted the man and determined he was drunk in public. The man stated he jumped into the water because he was in a hurry to enjoy Catalina Island and he jumps from boats all the time. The man was arrested for public intoxication and intentionally jumping from a vessel. He was booked at Avalon Sheriff’s Station.

Deputies responded to a possible spousal assault on the 200 block of Beacon Street. The caller stated she was locked in the hotel bathroom because her boyfriend had hit her. The deputies detained both parties and conducted an investigation. During the investigation it was determined both parties had assaulted each other, and both were primary aggressors. The deputies arrested the man and woman for alleged spousal battery.

Deputies conducted foot patrol in the downtown area while the cruise ship passengers were on Island. The deputies concentrated on pedestrian traffic near Pebbly and Clarrisa. They also focused on people smoking marijuana in public. The deputies issued numerous warnings and the tourists were cooperative and thankful for the way deputies treated them.

Deputies responded to the 800 block of Crescent Avenue regarding a burglar alarm. The deputies checked the location and it appeared to be secured with no signs of entry. The deputies contacted the owner of the home via telephone and ensured him no break in had occurred.