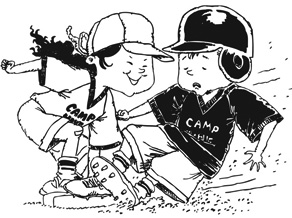 Straight Up Builders Are League Champions

Straight Up Builders Are League Champions

What an exciting season the men’s Avalon Summer Softball League has had so far.  The final league game had the potential of a three way tie.  Can’t ask for any tighter standings than that.  Straight Up Builders was in control of their destiny – win and they win it all.  Lose and sit back and wait for the final game to be played.  With that said, Straight Up Builders and Bravo’s Landscaping played in the first game.

After two walks, Bravo’s Landscaping turned the double play to leave a runner on third.  A base hit scored the run, followed by the two run inside the park homerun from Robert Ozark for Straight Up Builders.  Allan Vega made the highlight reel with his play from shortstop to end the inning.  In the bottom of the second Bravo’s Landscaping had a walk, six base hits and a three run inside the park homerun from Danny Alonso to have a total of six cross the plate.  Top of three, and Straight Up Builders tied it up with two runs home on a walk and two base hits.  Bottom of three, with two runners on Weston Leonhardi denied Tino Rodriguez of the RBI hit with a great catch in left.  The runners were left stranded to end the inning.  Top of four, and Straight Up Builders broke the tie with six runs off four base hits, a walk, doubles from Ryan Hinkley and Weston Leonhardi, and a two run inside the park homer from Nick Morones.

The game between Avalon Freight Services and Catalina Express would determine second place.  Avalon Freight Services was up first, and Joe Hernandez opened the game with a triple.  A base hit, and an error scored one, with the second run scoring on the double play.  A fly ball ended the first half of the inning.  A short handed Catalina Express brought their bats to the game.  With one out, three errors, three base hits and a three run homer from Roberto Martin added up to six on the board.  Avalon Freight Services tied it in the second with three base hits, a double from Phil Lopez and a triple from Isaac Felix to have four cross the plate.  Robert Reyes made a great dig at first to collect the second out of the inning.  Catalina Express edged ahead in the bottom half of the inning. Paul Daniel Romo collected the two RBIs on his double.  In the third, an error in the outfield lead to an inside the park homerun for Robert Reyes.

Four more base hits, a couple of errors, and a triple from Julian Tejeda followed, bringing home five more, for a total of six runs in the inning.  Anthony Hernandez made a great catch of a hard hit line drive to end the Avalon Freight Services threat.  The bottom of the fourth was all Catalina Express.  Joey Hall started it off with a home run.  A walk scored on the double from Danny Hernandez, who scored on the homerun from Anthony Hernandez.  Three walks and a triple from Robert Reyes was followed by a grand slam from Joey Hall.  Another error, then back to back homeruns from Anthony Hernandez and Julian Tejeda added up to twelve runs home.

Top of five, and Avalon Freight Services’ Chuy Sillas got the RBI off his double. In the top of the sixth, Chris Barrios collected an RBI off his double, then scored on the double from Roger Hernandez.  Bottom of six, and Paul Daniel Romo turned a base hit into a triple after the error in the outfield.  Two more base hits brought home another run for Catalina Express.  Time expired, and the game ended with the score Avalon Freight Services 9, Catalina Express 28, giving Catalina Express second place in the league.

Tournament begins this Friday.  Come on out and catch an exciting game at Joe Machado Ballpark!