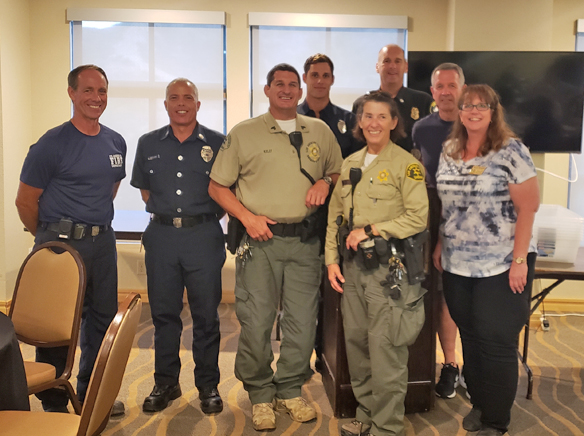 • Deputies arrested Peter Jones from Avalon for threatening to kill someone with a knife in the 100 block of Hill Street.  He was arrested on suspicion of making criminal threats.

• Deputies received a call that a motorcycle was parked in the taxi only parking in the 300 block of Sumner Avenue.  The motorcycle had been moved prior to the deputies’ arrival.

• Deputies arrested Michael Lipscomb from Two Harbors on suspicion of burglary in the 400 block of Crescent Avenue.  A maid was cleaning a hotel room when the suspect allegedly went into the room and stole items.  He was detained outside the hotel room until deputies arrived and arrested him.

• Deputies from Two Harbors responded to Little Harbor Campground with Baywatch regarding a camper who fell and injured her shoulder.  Baywatch assisted the injured camper.  Her injury was minor.

• Deputies arrested Dwight Lee and Lakeysha Wright from Los Angeles on suspicion of assaulting each other in the 500 block of Crescent Avenue.

• Deputies arrested Ivan Hernandez Silva from Avalon on suspicion of driving under the influence of alcohol in the 100 block of Sumner Avenue.

• Deputies responded to a fight call in the 200 block of Falls Canyon Road.  One female juvenile assaulted another female juvenile.  The victim was airlifted to a hospital on the mainland due to her injuries.  Deputies started a criminal investigation, identified witnesses and located video of the assault.

• The juvenile that assaulted the victim from the September 16th assault was placed under arrest/detained and transported to the Avalon Sheriff’s Station. Due to juvenile laws, she was issued a citation and released to her father.  She will have a court date in the near future.