Editor’s note: The fol­low­­­ing is the Avalon Sheriff’s Sta­tion significant incidents report for the week of May 5 to May 12, 2021. All suspects are presumed innocent until proven guilty in a court of law.

• Deputies responded to the 300 block of Wrigley Road regarding a loud music call for service. Deputies contacted male adult at the location who turned down his music.

• Deputies responded to the 100 block of Sumner Avenue regarding a disturbance call. The caller stated a male adult was throwing a football at rental golf carts and bothering customers at the Atwater Hotel. Deputies contacted a male adult and warned him regarding his behavior. He cooperated and left the location.

• Deputies responded to the 100 block of Sumner Avenue regarding a male throwing a football at pedestrians walking near the location. Deputies checked the area for the same male adult they warned on May 5-2021 for creating the same disturbance. The disturbing party left the location prior to their arrival and they were unable to locate him.

• Deputies received a call at the Green Pier regarding narcotics found at the location. A boater who was moored in the harbor found a bag floating next to his boat. He retrieved the bag from the water and noticed it contained narcotics and contraband. The boater called Harbor Patrol who took possession of the bag and gave it to responding deputies. Deputies opened the bag and saw it contained suspected heroin and numerous items of contraband used to ingest illegal narcotics. The narcotics and contraband was transported and booked at Avalon Station.

• Deputies were contacted at Avalon Sheriff’s Station regarding a stolen/lost cell phone. The victim stated while shopping at Von’s Market, she placed her iPhone in her basket and that someone had stolen it. During their investigation, deputies reviewed surveillance video from Vons. Video footage shows the victim exited the store with her groceries and did not grab her phone from the basket and drove away. The surveillance video also showed a female, with green hair, take the basket and enter the store to shop. The female was then observed shopping in the store and the cell phone no was longer in the basket. Deputies searched the area for a female with green hair, but were unable to locate her.

• A report was taken at Avalon Sheriff’s Station regarding a vandalism and petty theft of an American flag, damaged flagpole and bracket. The American flag was taken from the 300 block of Sumner Avenue. Security cameras from different locations contain footage of the suspects walking towards and away from the location. Detectives are investigating the case.

• Deputies responded to 128 Sumner Avenue, “Pete’s Café” regarding a male adult yelling at the location. The deputies checked the area and were unable to locate the disturbing party.

• Deputies responded to the 100 block of Maiden Lane regarding a possible domestic violence incident. Deputies discovered the suspect was arguing with his boyfriend of four months regarding trust issues. The suspect stated the victim punched him several times, hitting him in the arms, chest and back. The victim also pushed the suspect onto the bed and began to strangle him. The suspect was able to push the victim off and run into the bathroom and lock the door. The victim stated that earlier, the suspect had punched her at a bar and had to hug the suspect to calm him down and stop assaulting him. Based on the statements from both parties, coupled with the injuries, the suspect was identified as the primary aggressor and Chad Hall, DOB May 5, 1976, of Long Beach, was arrested on suspicion of spousal battery. The Suspect was transported to Avalon Sheriff’s Station and booked. Both parties were offered emergency protective orders and they declined.

• Deputies received a suspicious person call on the 100 block of Crescent Avenue. The caller stated two males were standing on her porch so she locked herself inside her bathroom. Deputies responded to the location and were unable to locate any suspicious individuals on her porch or in the immediate area.

• Deputies received a call for service of a drunk adult male on the 100 block of Catalina Avenue. During their investigation deputies determined the male was drunk in public and unable to care for himself. The suspect was placed under arrest and booked at Avalon Sheriff’s Station on suspicion of being drunk in public.

• Deputies responded to a traffic hazard on Pebbly Beach Road. The caller stated there was a deserted golf cart on the roadway. Deputies discovered an abandoned rental golf cart that had run out of power. Deputies with the assistance of Code Enforcement removed the vehicle from the roadway.

• Deputies received a Petty Theft report Call at 205 Crescent Avenue, “Bay of The Seven Moons” store. The caller stated unknown suspects had stolen the sea lion statue from in front of the store.

Avalon Station Detectives along with help from the community were able to identify the suspects and locate the stolen sea lion. The suspects returned the sea lion to its owner and reconciled with her. The owner of the sea lion was non desirous of prosecution and instead opted for the suspects to perform an act that would benefit the city of Avalon.

• Deputies received a call for service of 6-8 people fighting at the “Chi Club.”

Upon arrival there was no one fighting at the location and no signs of any disturbance.

• Deputies received a family disturbance call at 888 Country Club Dr., Holiday Inn. They contacted a male and female at the location and determined no crime had been committed at the location.

• Deputies responded to 56 Pebbly Beach Rd., IEX Helicopters, regarding a disturbance at the location.

The caller stated that a male adult was yelling at an employee because he asked the male to move while a helicopter was arriving. Deputies determined there was no crime at the location. 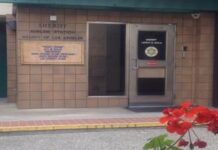