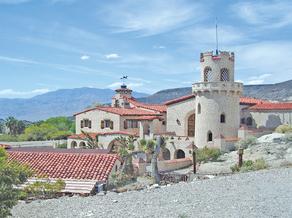 Yea, though I drive through the shadow-less Valley of Death, I will fear no evil, for I am behind the wheel of a brand new, air-conditioned Dodge Dart rental with 15 gallons of fuel and two gallons of drinking water.

It’s 7 a.m. and the sun is rising above the twisted brown mountains of Death Valley National Park where coyotes prowl, scorpions skitter and the shade is only where you make it.

Yea, though I drive through the shadow-less Valley of Death, I will fear no evil, for I am behind the wheel of a brand new, air-conditioned Dodge Dart rental with 15 gallons of fuel and two gallons of drinking water.

It’s 7 a.m. and the sun is rising above the twisted brown mountains of Death Valley National Park where coyotes prowl, scorpions skitter and the shade is only where you make it.

I’m on my way to chase down a lead given to me by now-retired Island Company tour guide Fred Kilbride regarding the possible existence of a hitherto-unknown cache of Catalina Island tile at that Death Valley paradox known as Scotty’s Castle.

Fred was giving a tour on the Island one fine day when one of his passengers told him about “stacks” of Catalina tile that were evidently stored in the catacombs beneath Scotty’s.   So, I had to go see for myself.

But first, you’re probably wondering what Scotty’s Castle is and why there would be any Catalina tile there.

As my tour guide at Scotty’s said, “Nothing in the desert is as it seems,” and Scotty’s Castle fits that description to a T.

Our story begins more than a century ago when a Kentucky con man by the name of Walter Scott began soliciting investments from gullible mid-western and eastern businessmen to help him develop a series of impossibly rich gold mines he claimed to have discovered.

“Scotty,” a former showman in Buffalo Bill Cody’s Wild West Show, was evidently quite good at his craft (conning, not gold mining) and managed to lure in a number of such investors, only one of which, Albert Johnson, ever bothered to make the trip out west to verify his investment.   More on Johnson later.

There were, of course, no gold mines and Scotty gleefully blew his investors’ money on living large and making lavish trips to the big city.  It was not uncommon for him to pin $100 bills to his suspenders, walk into a bar and buy round after round for the house.

This lifestyle went on for years and though the investors came and went, the game was always the same.  All the money came west and none of it went back east.  So as time went by, Scotty’s backers naturally began to ask where their gold was.

“A flash flood destroyed the roads to the mine and it will be weeks before we can rebuild them.  Please send money for new roads,” Scotty would tell them.

Or “There’s a big mountain lion around here that’s eaten all my mules so I can’t bring any gold to town.  Please send money for more mules.”

Or my personal favorite, “It’s too hot right now and if I bring the gold out of the mine it will melt.”

Now, the only thing most of these big-shot investors knew about the West was what they had read in dime novels and lurid newspaper articles so it all made perfect sense to them.  As a result, Scotty’s diversions worked quite well, at least for a time.  Those who wised up to him eventually drifted away, writing the whole thing off as a loss and a hard lesson learned.

But one day Scotty managed to reel in an investor by the name of Albert Johnson, a banker and bonafied mining engineer from Chicago who presumably knew that the temperature at which gold melts was far higher than any temperature that even Death Valley could muster up.

Johnson soon tired of Scotty’s excuses and insisted on coming out West to see this investment of his and to try to determine why it was yielding no dividends.

Try as he might, Scotty couldn’t put him off and he reluctantly agreed to pick Johnson up at the Barstow train station.  In one last ditch effort to dissuade Johnson from falling upon his epic swindle, Scotty hired a gang of local men (using Johnson’s money no doubt) to stage a mock “bandit” attack, complete with live ammunition.

As the stage coach wound its way through the hills of Death Valley, the act began.  The sounds of rifles cracking and men cursing filled the desert air.  Scotty pleaded with Johnson one more time, urging him to give up his foolish quest and return to Chicago where it was safe.  But Johnson refused.

Unfortunately, the bandit raid was a little TOO realistic and Scotty’s brother was accidently shot in the hip by one of the actors.

At that, Scotty stood up and hollered for the shooting to stop.  The “bandits” came out of the hills one by one and helped tend to the wounded man.  The little party packed him into the stage coach and took him back to Barstow, an effort that took three days.

The jig was up.  Johnson, fuming, made his way back to Chicago, intent on washing his hands of the whole affair, even though he had been bilked by Scotty out of nearly $100,000 in all.

But then a curious thing happened.  One day, Scotty received a telegram from Johnson; not admonishing him nor cursing him nor demanding that Scotty give him his money back.  Rather, it was Johnson proclaiming that he had found the whole affair so entertaining, so amusing and so full of adventure that he wanted to move out to Death Valley with his wife to live permanently.  He not only forgave Scotty, but he even offered to continue financing Scotty’s bacchanal lifestyle, keeping him around as a sort of hired court jester.

To help alleviate the discomforts of life in the desert (especially for Mrs. Johnson), Albert Johnson would build a castle, a grand home at an oasis in the Valley of Death.  Thus, construction began on what would become known as “Scotty’s Castle.”

And this is where our Catalina tile comes in.  Or does it?  As my tour guide said, “In the desert, nothing is at it seems.”