Business of the Year, Sustainable Tourism and Community Service acknowledged

Love Catalina Island/ Tourism Authority, the local Chamber, recognized local businesses as part of its Annual Meeting on Thursday, July 21. The event was held at the Airport in the Sky Restaurant.

Harvey Cowell was the proprietor of Island Pharmacy, a prominent leader of the Catalina Island business community, served as an Avalon City Council Member and Mayor, and remained active in the community until his death at the age of 98 in 2011. The Harvey Cowell Business of the Year Award was established to recognize an extraordinary contribution by a business to the furtherance of tourism in/to Avalon and Catalina Island.

• Business of the Year nominees this year were:

Megan Wright and her team at Café Metropole, Airport in the Sky Restaurant, Pancake Cottage and Scoops Ice Cream. Megan’s resilience and vision, even in the midst of COVID-19, was called out.

Catalina Divers Supply, this year’s winner, received the most nominations for their amazing addition to the community with the opening of the Dive Center at Avalon’s Casino Point Dive Park.

The Catalina Island Conservancy received multiple nominations for their long standing work in sustainability, and were celebrated for marking a milestone of 50 years in 2022! and specifically in honor of the milestone of doing so for 50 years, as of 2022!

This award is not given each year, but instead is given when an individual or family has been so outstanding in their service to the Catalina Island community, that they earn a permanent place of recognition on a plaque in the Catalina Island Visitor Center as well as in all of our hearts. This year the award was given to Whitey Mendenhall, the nominee who, despite being in his 90s, continues to give through community service including work with the Catalina Island Conservancy where he nurtures seedlings at the Native Plant Nursery, as well as with Avalon Rotary, where he remains an active participant in service projects.

Wayne and Susie Griffin issued a statement that said: “We are thrilled to learn that Whitey Mendenhall is the recipient of this year’s award! Whitey was one of the first people we met when moving to Avalon in February 1978, and he continued to be a friend throughout the 33 years we lived on the island. We agree with the nominator that Whitey is most deserving of this community service award. Congratulations, Whitey, and thank you for all you have done for Avalon and Catalina Island!”

All of the awardees were present and received certificates honoring their contributions and hard work. Congratulations to the winners. 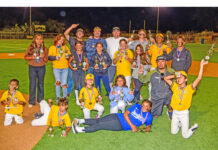 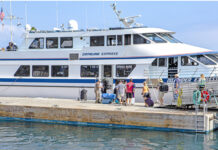