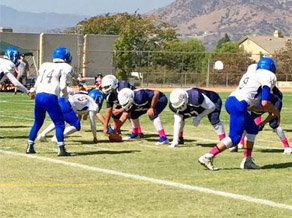 The team really stepped up in its first league game.

Quarterback Jose Gomez led the Lancer offense and was a great leader throughout a game that had many ups and downs.

The team really stepped up in its first league game.

Quarterback Jose Gomez led the Lancer offense and was a great leader throughout a game that had many ups and downs.

Jason Campos had another great game running the ball, rushing for over 130 yards on the day while his partner, at fullback, DeAngelo Reyes also grinded out valuable yards keeping Laverne on their heels and dragging would-be tacklers up the field.

Beto Martinez played a fantastic game at cornerback. He was asked to shut down the Laverne primary receiver, and he stepped up and did a great job. He iced the victory at the end of the game coming up with a game clinching interception right when the team needed it.

Senior Danny Mulgado played his best game of the year at nose tackle.

Laverne was down by two possessions down near the end of the game and they were in a passing situation when Mulgado began putting relentless pressure on the Laverne quarterback and he also played a huge part in shutting them down throughout the game.

This was truly a team effort and the team’s best game of the season thus far.  Alex Lira had a great game at center, once again, and Diego Rios commanded the middle of the line on defense and offense.

Rios does a commanding job of lead blocking for the squad’s running backs and he had his motor running all game.

Jose Silva and Cristo Hernandez both played huge parts in the victory.  Cristo hauled in a 40 yard pass early in the game that led to a Lancer touchdown and he made things difficult for the Laverne offense by closing down the outside at defensive end.

Silva plays offense and defense and was quite simply involved in almost every play. He plays with great tenacity and emotion and is showing solid leadership.  Tony Ramos and Freddy Zavala also dug in on the offensive and defensive line and shared in the Lancer success. Juan Chavoya, Jesus Martinez and Angel Hernandez played instrumental parts in the victory.

They have committed to becoming better every week and it is showing.

Michael Moreno and Ulices Zavala round out the active Avalon roster and are a part of this year’s group of Lancer football players.

The Lancers were faced with a couple of difficult situations in the game and they refused to let the momentum swing against them, they held their composure and determination and emotionally and physically dominated this game from start to finish.

Avalon plays its next game today on the road against St. Micheal’s Prep at 3:30 p.m.