The coronavirus has plunged Catalina Island into a crisis not seen since World War II. Much like today, the island underwent dramatic changes for those who lived here, almost overnight. To recall those days, the Catalina Islander is reprinting the series “Fortress Catalina: The Island at War.” This week’s column also happens to coincide with the 75th Anniversary of the end of the war in Europe.

Deep within the dusty crawl spaces of the Casino, well beyond reach of the casual visitor, is a fascinating bit of vintage graffiti painted many years ago on a sheet metal ventilation duct. It reads simply:

The Allied victory in Europe, which would come to be known as “V-E Day,” took place in Germany on May 8, 1945. But because of the global time difference, it was actually on the evening of May 7 that people in America first heard the news. This means that our anonymous artist— a janitor perhaps, a maintenance man or theater employee—was possibly one of the first people on the Island to hear the news.

But the Second World War was a war fought in two distinctly different theaters of operation and victory in Europe meant that the battle was only half won, as evidenced by the (these days) un-PC epithet that our graffiti-ist left us regarding the end of the war in the Pacific.

As joyous as V-E Day was, it wouldn’t be until several months later, on the afternoon of August 14, 1945, that the announcement came in America that the war with Japan was over, thus heralding “V-J Day” and the end of the Second World War.

Jeanne Hill remembered that day. “Suddenly, over the radio, came the news that the Japanese had surrendered,” she said in an interview in 2009. “Everyone got out of their cars and we were all hugging each other. And it was just so marvelous.”

At the invitation of a friend, Jeanne joined the victory party in Hollywood. “We were right in the middle of things, at Hollywood and Vine, and I have never seen such an expression of real, honest-to-goodness joy.”

“It was a big party,” said Lolo Saldana. “There was a big party up at the Bird Park. The Merchant Marines brought all the food and the booze. I know a kid who got so drunk they had to carry him home and this kid wasn’t even a teenager yet.”

Lolo, not being much of a “party guy,” said he spent the day golfing and watching the festivities with amusement from the greens.

With the cessation of hostilities, things began to return to normal on the Island. Rationing came to an end, which meant that the average citizen could once again buy as much sugar, meat or gasoline as they wished, or at least could afford. Tourists were once again permitted to visit the Island, the Coast Guard office in Avalon closed, the Merchant Marines weighed anchor and sailed away and for the first time in four years Kindergarten classes were offered at Avalon School.

As the world began to rebuild, Catalina Island and the whole nation would endure the kind of post-war recession marked by the sudden influx of millions of young men and women re-entering an already anemic civilian economy. Visitor counts to the Island wouldn’t recover to pre-war levels for years. But after four years of tragedy and strife, it was something we could all live with. The war was over and that’s all that mattered.

Milton wrote “Who overcomes by force, hath overcome but half his foe” and the end of the most catastrophic conflict in world history had opened the door to a new and dangerous world—a world that now had the technology to destroy itself.

Despite the fact that “the bomb” had brought a sudden and unexpected end to the conflict, the fact that a technological devil was now on the doorstep was not lost on the American public. The Catalina Islander published many thought-pieces on what this new world might bring, including an article that appeared in the January 24, 1946, issue of the paper.

“The explosion of this atomic bomb,” reads the article, “marking the advent of awful power in the hands of men, illuminated more than the deep and dark places in the mountains. The blinding flash was a revelation which threw searing and penetrating light into the dark chambers of men’s souls where pride and greed and hate are stored up and nurtured. The deafening roar of thunder was a warning of the dire fate awaiting humanity if men, possessing new destructive power, use it in the service of pride and greed and hate.”

But the war also brought change to American society with the emergence of gender and racial Civil Rights. From “Rosie the Riveter” to the Tuskegee Airmen to the legendary Japanese-American 442nd Infantry Regiment, the contributions to the war effort by women and minorities could not be ignored.

Around the nation and on Catalina the racial/gender tune was a-changin’ as evidenced by a frank Letter to the Editor published in this very paper on January 24, 1946. Signed only by “A Veteran,” the letter reads:

“Dear Sir. This week there was a Citizens Committee meeting held in Avalon. Its purpose seemed to be to keep the Negroes out of Avalon and property owners would be asked to sign an agreement not to sell property to Negroes.

“As a World War Veteran of World War II and as a citizen I am ashamed of my fellow citizens. We have just finished fighting a great war and one of the causes of this war was racial prejudice. If I remember rightly, the Negro fought and died, as a citizen of a free country, that these prejudices might cease to exist.”

With the end of the war, America now had time to take stock of itself and rebuild. And like the rest of America, Catalina Island buried her dead, and tried to go on. 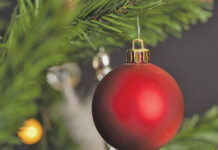