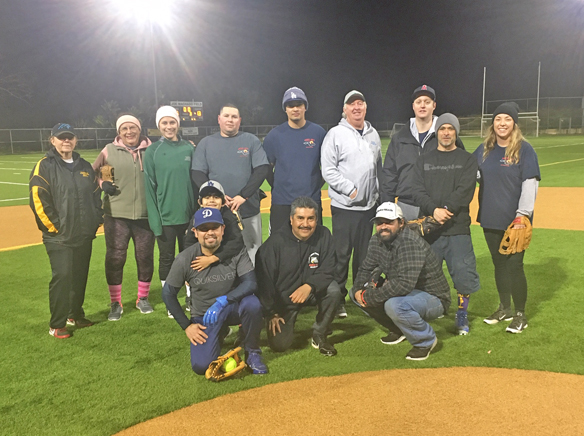 The rain held off, so the final game of the Catalina Co-Ed Softball Fall season tournament could be played. Coyote Joe’s was up first and opened with a base hit followed by a two RBI home run from Justin Hernandez. Two base hits brought home one more run.

Straight Up Builders got on the board in the bottom of the second when they turned a walk into a run. Juan De La Cruz started the top of the third for Coyote Joe’s with a double. Frank Rojo followed with an RBI triple. Rachel Mc Cormick collected an RBI on her hit, and later scored on the double from Justin Hernandez, who scored on a sacrifice fly. A total of four came home.

Coyote Joe’s added one more run in the fourth. Coyote Joe’s kept the pressure on, scoring three more in the fifth inning. Chuy Sillas collected two RBIs on his double and scored on the double from Sebastian Gallegos.

Straight Up Builders got back in the game in the sixth inning. With one out, a walk was followed by a double from Jose Octavo. Ryan Hinkley hit a triple for two RBIs and scored on a throwing error. Billy Boyd followed with a double, and again made it home on throwing errors. Four crossed the plate in the inning.

Coyote Joe’s put the game away in the top of the seventh and final inning. Four base hits, three errors, two walks and a sacrifice fly brought home seven more runs. Straight Up Builders got their last at bat. Two base hits and a sacrifice fly brought home a run. The game ended with the score Straight Up Builders 6, Coyote Joe’s 18.

It’s been a fun season. Thanks to our sponsors, Bravo’s Landscaping, Coyote Joe’s, Straight Up Builders and The Lobster Trap. We appreciate your support. Thank you also to the players and fans who came out every week in the cold to warm up the diamond. We appreciate the Leyva’s opening to feed the crowd. Special thanks to the City of Avalon for the use of the Joe Machado Ball Park.

We’ll be back on the diamond in March.