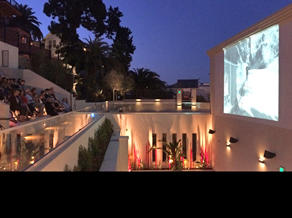 The Avalon High School students studied silent films and the characteristics that work specifically with that genre. The students worked with Guadagno on the script. Leo starred as the main character. Lee directed, edited and even made an appearance on camera. Avalon resident, Jim Watson also assisted with the project.

“During the editing process, Curtis’ acting reminded Jim Watson of Buster Keaton’s film’s so we watched a few videos of him,” Lee said when asked about the subtleties of silent film.

The Catalina Island Museum approached Mortilla and discussed the possibility of him providing an original score for the film.

Jumping at the chance, Mortilla eagerly awaited the film. Upon receipt, he was so impressed he created not only one score but three!

“What a privilege and an honor to be asked to score the wonderful student film I Found My Love in Avalon,” said Mortilla about the project. “The film is so well made that with the very first viewing, I could imagine several possible scores. The editing is perfectly timed, the characters consistently well performed, the cinematography perfectly framed, and the script is both interesting and well structured. Makenna Lee is a standout filmmaker with a brilliant future ahead of her.”

Following the Silent Film Benefit, for which Mortilla composed and performed an original score for Peter Pan, the student film premiered in the museum’s outdoor amphitheater. It was the first time anyone – including Lee, Leo and Guadagno – had heard the scores created by Mortilla. The students and audience were treated to three different versions demonstrating how critical music is to the feel of the film.

When asked about this experience and Mortilla’s compositions, Lee said, “Each score inspired different feelings. The first had lots of different sounds and instruments that gave the film a circus feel. The second was all piano made the audience sympathize with the main character’s struggles. The last was my personal favorite, it highlighted every subtlety I edited into the film. I couldn’t stop smiling and it felt like I was seeing my movie for the first time. It was truly an amazing experience.”

The museum hopes to work more with Mortilla for future events and educational opportunities.

As for Lee, she will be heading off to Loyola Marymount University this fall to study film production.

The Catalina Island Museum offers the best in art and history exhibitions, music and dance performances, lectures by guest speakers from all over the world, and the finest in silent, documentary and international film. Open seven days a week from 10 a.m. to 5 p.m., except Thanksgiving Day and Christmas Day, the new Ada Blanche Wrigley Schreiner Building is located in the heart of Avalon at 217 Metropole Avenue. For more information, the museum may be reached by phone at 310-510-2414 or at its website: CatalinaMuseum.org.