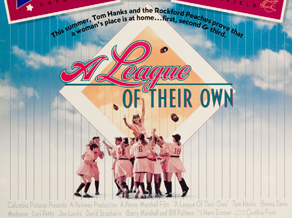 “There’s no crying in baseball!” That famous line is from A League of Their Own released 25 years ago. The film – based on a true story with a connection to Catalina Island – will be featured during Movies at the Museum in the Catalina Island Museum’s outdoor amphitheater on Wednesday, Aug. 9 at dusk.

“There’s no crying in baseball!” That famous line is from A League of Their Own released 25 years ago. The film – based on a true story with a connection to Catalina Island – will be featured during Movies at the Museum in the Catalina Island Museum’s outdoor amphitheater on Wednesday, Aug. 9 at dusk.

Most well-known as the owner of Wrigley’s Gum and the Chicago Cubs, Wrigley also owned Catalina Island.

The Cubs enjoyed spring training in Avalon from 1921 to 1951. Wrigley was a shrewd businessman and recognized that the dwindling attendance to Major League Baseball games due to the Great Depression would now suffer even more as the players were drafted and shipped overseas. Ballparks would have to close.

Softball was the most popular sport in America at the time and women were active participants.

With the proper marketing and image, Wrigley knew a professional women’s league could be a money-maker and a welcome distraction from the war. Using some of his Cubs employees and other contacts throughout Major League Baseball, he assembled the management team and they began scouting for players.

Wrigley set out to find the ballparks and cities to use. He promoted the league as good for the community and good for the war effort, therefore good for you.

Four Midwestern cities responded. Each raised $22,500 and Wrigley matched that sum out of his own pocket. The women’s league would not profit from the games. Any money made would go directly to fund projects within that respective city. The first four teams were the Kenosha Comets (Wisconsin), Racine Belles (Wisconsin), Rockford Peaches (Illinois), and South Bend Blue Sox (Indiana). The league would expand as the years went on. The players themselves were paid a very decent wage for the time – sometimes two or three times what they could earn otherwise.

It was marketed as All-American and the players were expected to act like ladies on and off the field. A strict set of “Rules of Conduct” were developed. They were not allowed to smoke or drink, to wear slacks or shorts in public, etc. Even their uniforms were modified dresses. They either had to have shoulder-length hair or short hair in curls and were never to go without make-up. If they broke the rules they were fined. Their spring training consisted of baseball practice during the day and charm school at night.

“They were selling a product,” said second baseman Sophie Kurys. “They wanted us to be feminine and (at the same time) play like Joe DiMaggio. What they didn’t realize was how well the girls could actually play.”

Movies at the Museum takes advantage of the Catalina Island Museum’s outdoor amphitheater and Avalon’s beautiful summer nights. This program highlights classic family-friendly films whose themes may be related to the island or to museums in general.

A few selections may include movies filmed on island as well. The evening also offers late night access to the special exhibition Chihuly at the Catalina Island Museum when the outdoor installations are dramatically illuminated.

The museum will re-open at 7:00 pm and the film will begin at dusk in the outdoor amphitheater. Attendees are encouraged to bring their own snacks and beverages (alcoholic and non-alcoholic). However, please do not bring glass.

The Movies at the Museum screening of A League of Their Own will take place on Wednesday, August 9. Tickets are $3 for museum members, $17 for adults and $15 for seniors, military and students with a valid I.D.  Children (age 15 and under) receive free admission with a paid adult. Admission may be purchased online at CatalinaMuseum.org, in person at the museum’s visitor services desk, or upon arrival at the door.

Next Movies at the Museum Event:

The Catalina Island Museum offers the best in art and history exhibitions, music and dance performances, lectures by guest speakers from all over the world, and the finest in silent, documentary and international film. Open seven days a week from 10:00 am to 5:00 pm, except Independence Day, Thanksgiving Day and Christmas Day. The new Ada Blanche Wrigley Schreiner Building is located in the heart of Avalon at 217 Metropole Avenue. For more information, the museum may be reached by phone at 310-510-2414 or at its website: CatalinaMuseum.org.